The Primary Mission of Prophets is to bear witness of Christ

Posted on September 8, 2013 by bonniesimone

Just before Jesus ascended to heaven he gave his apostles the divine commission
to bear witness of Him when He said, “ye shall be witnesses unto me both in Jerusalem, and in all Judea, and in Samaria, and to the uttermost part of the earth.”  What in particular were they to be witnesses of?   Jesus asked his apostles a very important question, “Whom do men say that I the Son of man am?” (Matt:16:13) Simon Peter answered the question thus: “Thou art the Christ, the Son of the Living God.” (Matt:16:16 To bear that witness, that Jesus is the Christ, to all the world has been the focus of all the
prophets both in the Old and New Testaments.  It is the focus of latter-day prophets and apostles as well.    In a beautiful collaborating statement showing that the church which Jesus established and the Church of Jesus Christ of Latter-Day Saints are one in purpose, Joseph Smith said, “The fundamental principles of our religion are the testimony of the Apostles and Prophets, concerning Jesus Christ, that He died, was buried, and rose again the third day, and ascended into heaven; and all other things which pertain to our religion are only appendages to it.”

After the death of Jesus the primary mission of his Apostles was to be witnesses of his resurrection. The first act which they performed as a quorum of Apostles, with Peter at the head, was to choose another Apostle to take the place of Judas Iscariot.  Peter said:  “Wherefore of these men which have companied with us all the time that the Lord Jesus went in and out among us . . . must one be ordained to be a witness with us of his resurrection. Acts 1:21—22) From that time forth they went forth, boldly, and at the peril of death, to bear witness of Jesus and his resurrection.   Just as Joseph Smith knew, they knew that Christ’s newly established church was built on “the testimony of the Apostles and Prophets, concerning Jesus Christ, that He died, was buried and rose again the third day.”  The following are just a few examples showing that knew and understood their divine mission.

Act 2:32 This Jesus hath God raised up, whereof we all are witnesses.

Act 4:33  And with great power gave the apostles witness of the resurrection of the Lord Jesus: and great grace was upon them all.

Acts 10:42 – 43 (42)  And he commanded us to preach unto the people, and to testify that it is he which was ordained of God to be the Judge of quick and dead. (43)  To him give all the prophets witness, that through his name whosoever believeth in him shall receive remission of sins.

The Church of Jesus Christ of Latter-day Saints is “built upon a foundation of apostles and prophets,” just as was Christ’s church when he was on the earth.  If the Jesus’ early apostles were called to be special witnesses of Christ, then his latter-day apostles would have the same divine commission.   The Doctrine and Covenants, another of the Standard Works of the church, defines the role of Apostles.  It teaches “The twelve traveling councilors are called to be the Twelve Apostles, or special witnesses of the name of Christ in all the world. (D&C 107:23)

Throughout the history of the church from Joseph Smith to President Thomas S. Monson, including all those who were ordained to the office of an apostle, each has born a powerful witness that Jesus is the Christ.   One has only to listen to the General Conferences of the church to hear their testimonies.  The combined strength of the testimonies of literally every prophet and apostle of the latter-days resonates through the years and is indeed the foundation of the LDS church.   On January 1st, 2000 the First Presidency of the Church and the Quorum of the Twelve Apostles publicly declared their testimony of Christ.  In eloquent language it is an unequivocal statement of the divinity of Christ.   The last paragraph reads thus:

“We bear testimony, as His duly ordained Apostles—that Jesus is the Living Christ, the Immortal Son of God.  He is the great King Immanuel, who stands today on the right hand of His Father.  He is the light, the life, and the hope of the world.  His way is the way that leads to happiness in this life and eternal life in the world to come.  God be thanked for the matchless gift of His divine Son.”

In addition that testimony permeates every book of scripture that is revered by the church.  One of the most powerful testimonies in all scripture is given by Joseph Smith and Sidney Rigdon in the Doctrine and Covenants. “And now, after the many testimonies which have been given of him, this is the testimony, last of all, which we give of him: That he lives!  For we saw him, even on the hand of God; and we heard the voice bearing record that he is the Only Begotten of the Father.” (D&C 76:22-23 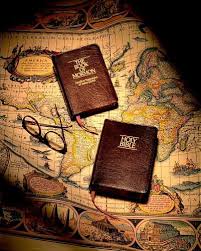 “And now I, Nephi, write more of the words of Isaiah, for my soul delighteth in his words.  For I will liken his words unto my people, and I will send them forth unto all my children, for he verily saw my Redeemer, even as I have seen him. And my brother, Jacob, also has seen him as I have seen him; wherefore, I will send their words forth unto my children to prove unto them that my words are true.  Wherefore, by the words of three, God hath said, I will establish my word. Nevertheless, God sendeth more witnesses, and he proveth all his words.” (2 Nephi 11:2-3)

For me personally, knowing that there are prophets and apostles in our day, as well as in days of old is comforting and assuring.  They teach truth.  I have often asked my children, “Whom do you trust to teach you truth?  Do you trust friends or political leaders?  Do you trust the current cultural trends?”   I trust God to teach me truth and He speaks through his prophets.  Amos, a prophet in the Old Testament, teaches, “Surely God will do nothing, but he revealeth his secret unto his servants, the prophets.”  (Amos 3:7)  God’s prophets bear witness of Jesus Christ, that he is the Son of God and the Savior of the world.

My name is Bonnie Hamilton. I'm wife, mother of 7 children and 24 grandchildren. I'm a member of the Church of Jesus Christ of Latter-day Saints. I have a testmony of its truthfulness and that it is the restored gospel of Jesus Christ. I have a great love for the Book of Mormon. I have read and studied it for many years. I know of its truthfulness. My blog, witnessofchristblog@wordpress.com is to share that testimony with others. Most of my posts will be on how the Book of Mormon is an additional witness of Jesus Christ, a companion to the Bible. I invite open and respectful comments and questions on my blog. If I don't know the answer to question, I will research it until I can give a satisfactory answer. I also have two on-line businesses, a survival website, emergency-survival-kits.com and a website selling children's room decor, funkidsroomdecor.com. If you need any of these types of items, I hope you visit my websites!
View all posts by bonniesimone →
This entry was posted in Jesus is the Christe and tagged Bible, Book of Mormon, Christ, Christianity, Jesus Christ, Joseph Smith, Mormon church, prophets, scriptures, witness of Christ. Bookmark the permalink.