What Are the Gold Plates?

WHAT ARE THE GOLD PLATES? 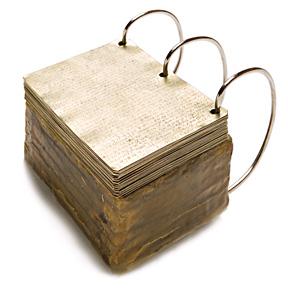 One may wonder just what does the LDS church mean by the Gold Plates from which the Book of Mormon was translated.   I have grown up in the Church of Jesus Christ of Latter-day Saints.  I grew up singing about the “Gold Plates.”  There is a Primary song that goes like this, “The golden plates lay hidden deep in the mountain side.”   Joseph Smith was directed by a heavenly messenger to a place on the Hill Cumorah in upstate New York to dig up a metal box containing metal plates and other artifacts.   These are referred to as the Gold Plates.  From those plates, under divine inspiration, he translated the Book of Mormon.  This is my heritage.  Yet, I recognize that to others, this idea of finding metal plates with ancient writing, dating back to 600 BC, might seem like a far-fetched idea.  Is that plausible?

Many ancient records have been found throughout the world

The world of archeology is always filled with new discoveries.  That’s the passion of archeology.  Have there been other discoveries an ancient plates?   To answer to that question is a resounding, yes!  There has been a treasure trove of ancient records written on both papyri and metal plates discovered in both the New and Old Worlds.  Research and documentation has been extensive.  Paul Cheesman, a noted archeologist, wrote the following in an LDS Ensign article.

The Plates of Darius I, ruler of Persia from 518–515 B.C., are the closest parallel to the Book of Mormon yet discovered. Two tablets, one of gold and one of silver, were placed in each stone box to be buried at the four corners of his palace. They describe the boundaries of his kingdom, praise Ahuramazda, “the greatest of all the gods,” and pray protection upon Darius “and my royal house.” They were discovered by an archaeological team in 1938. (National Archaeological Museum, Tehran, Iran.)https://www.lds.org/ensign/1979/10/ancient-writing-on-metal-plates?lang=

When collecting historical data various sources are often put together to form a more complete picture.  It is the same when the plates from which the Book of Mormon was translated.  Many people made statements describing different aspects of the plates, their appearance, size and weight.  In court, testimonies that vary slightly from each other are often seen as more truthful than when they match precisely. If all the statements are exactly the same, it can indicate that the witnesses have compared notes to fabricate a story that is too perfect.   Here is some of what we do know.  Much of this material is taken from an article in the New Era Magazine of the LDS church.  https://www.lds.org/new-era/2007/07/what-did-the-golden-plates-look-like?lang=eng

“Many critics have been quick to point out that if the record was made of solid gold it would have weighed much more than a person could lift. Besides being too heavy, thin plates of pure gold would not function well as a book. The metal would be so soft that it could easily tear from the rings, and engraving would be limited to one side.

The text of the Book of Mormon itself refers to Nephi’s seeking “ore” from which to make his plates. Metal ore usually has a mixture of various metals in it. Gold and silver are often mixed together in an alloy called electrum. Logically, the Book of Mormon plates could have been composed of these two metals. Some have suggested a combination of copper and gold.”

“The plates were sealed by Moroni after he had separated from the rest of his people. He would have used materials that were readily available to him at that time. The descriptions say they were “securely bound” and “appeared solid.” The statements indicate a complete encapsulation of the plates to protect and preserve them for the future.” (Ibid)

A Model of the Plates

At the top of this blog I’ve included an image of the official facsimile made by the Church of Jesus Christ of Latter-day Saints for the Church History Museum.   Here is the statement by Kirk Henrichsen concerning the making of the facsimile.

“In an attempt to be as accurate as possible, all known statements about the plates were compiled and compared. Unfortunately, there was not space in this article to include all of the descriptions.

“The process of making and using the model of the plates taught us more about them and led to some logical deductions. The difficulty in making the plates would encourage a scribe to be careful to fill the whole page and not waste any space. We learned how difficult it is to turn soft metal plates over loose metal rings. You have to lift each one carefully or they bind against the rings. Pliable metal changes with the pressures of movement; it becomes brittle and breaks. The holes have to be an elongated shape larger than the rings and cannot be too close to the edges or they tear out.” (Ibid)

The Value of the Gold Plates

We do not know the monetary value of the Gold Plates, but it is certain that such an archaeological find would be highly sought after.  Joseph could have sold them for monetary gain, and in fact, was cautioned by the angel Moroni that he would tempted to do so.  The following is from Joseph Smith’s history.

(the angel Moroni) “added a caution to me, telling me that Satan would try to tempt me (in consequence of the indigent circumstances of my father’s family), to get the plates for the purpose of getting rich. This he forbade me, saying that I must have no other object in view in getting the plates but to glorify God, and must not be influenced by any other motive than that of building his kingdom; otherwise I could not get them.” JSH 1:46)

Thanks be to Joseph that he was true to his calling!  To honest truth seekers the value of the plates is in the eternal truths that it contains, the testimony of Jesus Christ that permeates it pages.

A testimony of the Book of Mormon comes through faith, not sight

Would actually seeing the plates increase the likelihood of one believing that it is true? Perhaps it would motivate one to investigate further, but that investigation must be done with a sincere heart, with real intent, and with faith in Christ.  For me I do not have to see, to believe.  As Jesus said to Thomas,”Blessed are those who have not seen, yet have believed.”  Truly that is the beginning of a testimony of the truthfulness of the Book of Mormon.

“Seeing the plates would not necessarily motivate someone to accept the restoration of the gospel and make changes in his or her life. That motivation comes from reading and accepting the teachings of the Book of Mormon. What really matters is the spiritual witness that is promised to those who humbly seek to know the truth of these things. A true testimony of the Book of Mormon comes from reading it and, as counseled by Moroni in a promise he left to us in Moroni 10:3–5, praying about it.” (Ibid)

I think the information about the appearance of the plates is fascinating.  I like to picture them and picture Joseph translating them.  I love the story of the coming forth of the Book of Mormon, but this is not where my testimony comes from.  I have read the Book of Mormon many times and have had a spiritual witness that it is true.   I invite all who read my blog to do the same.

My name is Bonnie Hamilton. I'm wife, mother of 7 children and 24 grandchildren. I'm a member of the Church of Jesus Christ of Latter-day Saints. I have a testmony of its truthfulness and that it is the restored gospel of Jesus Christ. I have a great love for the Book of Mormon. I have read and studied it for many years. I know of its truthfulness. My blog, witnessofchristblog@wordpress.com is to share that testimony with others. Most of my posts will be on how the Book of Mormon is an additional witness of Jesus Christ, a companion to the Bible. I invite open and respectful comments and questions on my blog. If I don't know the answer to question, I will research it until I can give a satisfactory answer. I also have two on-line businesses, a survival website, emergency-survival-kits.com and a website selling children's room decor, funkidsroomdecor.com. If you need any of these types of items, I hope you visit my websites!
View all posts by bonniesimone →
This entry was posted in Book of Mormon construction and tagged Book of Mormon, Christ, Church of Jesus Christ of Latter day Saints, Gold plates, Joseph Smith, Mormon, Mormons, Moroni, witness of Christ. Bookmark the permalink.